On September 21, 2019 at 10:00 the second international action World Cleanup Day took place, 20,776,731 participants in 180 countries joined forces to solve one of the most important environmental problems - the problem of improper waste management. The purpose of the action is to draw public attention to the existing problems in the field of environmental protection; popularization of ecological way of life; formation of ecological consciousness and ecological culture among student youth.

From SCHOOL RECYCLING WORLD 14687 participants from 90 educational institutions in 21 oblasts joined the action. By joint efforts, 48,413.6 kilograms of garbage were removed, of which 21,593 kg were sorted and handed over for recycling.

"World Cleanup Day has become a kind of alarm clock for the whole world", - emphasizes the president of the international youth movement School Recycling World, a member of the international organizing committee of "World Cleanup Day" Julia Markhel, - "Each of us has heard that the problem of waste is one of the biggest problems in the modern world, but it is easy to turn our backs on this fact and mistakenly think that it does not concern me. It is important to realize that to clean up nature from the huge amount of garbage that covers it, just 5% population in every corner of the planet and a few hours of joint efforts are enough. Let's form a national culture of cleanliness and care for the environment together! ”

"The action, called World Cleanup Day, is a large-scale occasion to draw people's attention to the problem of environmental pollution and teach everyone to contribute to improving the global environmental situation. This year, schoolchildren, residents of cities and villages, corporate participants, business owners, government officials joined the action, and it worked - the cities became cleaner, and people's opinions - environmental "- Lyudmila Osipchuk, president of the Let's do it Ukraine NGO.

The organizer of the World Cleaning Day in Ukraine is the All-Ukrainian youth movement "Let's do it, Ukraine" (Letz du It Ukraine) together with the international movement Let's Do It! World, with the support of: the Cabinet of Ministers of Ukraine. Organizer of activities for student youth International youth movement "School Recycling World" (School Recycling World) with the support of PepsiCo Ukraine. 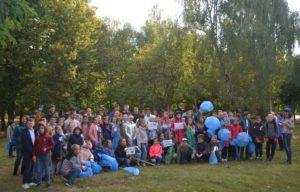 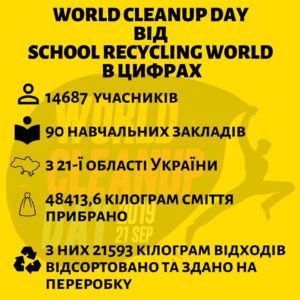