During the month from April 6 to May 6, 2021, schoolchildren and their families from all over Ukraine sewed a record number of eco-bags. Results of the second All-Ukrainian project "Bag": 21,873 students from 313 educational institutions, 24 regions of Ukraine sewed 47,269 bags, which are now used in everyday life.

The largest number was sewn by schoolchildren of Dnipropetrovsk, Donetsk, Khmelnytsky, Mykolayiv, Sumy regions. Participants made bags, painted them, decorated with appliques, cutouts, ornaments, creating real works of art. The older ones sewed the bags themselves, the younger ones were helped by their parents, relatives, and some even four-legged friends. The bags have become a real hit of spring.

The project was organized by the International Youth Movement "School Recycling World" with the assistance of the Ministry of Environment and Natural Resources of Ukraine, the Ministry of Education and Science of Ukraine, the Ukrainian State Center for Extracurricular Education, the National Ecological and Naturalistic Center and with support. The general partner of the initiative was PepsiCo Ukraine.

“We thank all participants and coordinators for their social activity, environmental responsibility and creativity. Despite the difficulties due to the introduction of distance learning in some schools this year, the All-Ukrainian project "Bag" broke last year's record. He led the fashion for the use of reusable bags among young students and their families, spread the idea of abandoning plastic bags that can not be sent for recycling and lie in landfills for 100 to 500 years, depending on the type ", - comments the President of the International Youth Movement "School Recycling World" Julia Markhel.

A competition was held within the project with individual and collective nominations. The winners will receive diplomas, eco and delicious gifts, the main gift will be given to the school whose students sewed the largest number of bags - a printer for sublimation printing.

The winner of the competition was the Secondary School №98 in Lviv, where students sewed 3160 bags this year.

Project coordinator at the school Perskova Irina notes: “Students really like eco-bags created by their own hands, so they already use them in everyday life and as gifts. The bags are not only practical and help to preserve the environment, but also make children visible in the dark, as decorated with reflective tapes, which, in turn, reduces injuries on the road. Many students painted them on eco-themes, depicting a polluted forest, a planet and a garbage sorting cycle. Now their bags speak to the world and express the owners' position on preserving the environment! ”

According to Ms. Irina, the children plan to sell bags at school and city fairs, hold flash mobs on eco-topics on the Internet, educational campaigns near supermarkets, and in September donate stationery to students from socially vulnerable categories.

The coordinator of the project at school Nagaeva Elena comments: "Since 145 students joined in sewing the bags, it took a lot of effort to create such a large number. They sewed bags at home, at work lessons, after classes, and in clubs. We plan to sell our bags as follows: part remains for the needs of the family, part we will give for free to the shops to replace the packages, the rest we give to the villagers. In the last week of May there will be a charity fair, where the bag can be drawn in a lottery with a minimum contribution. Proceeds will go to purchase tanks for sorting garbage in the village. We will distribute the remaining bags free of charge. Thus, we want to attract different segments of the population with different financial opportunities and draw the attention of all residents to the problem of excessive use of plastic bags. Our community is very grateful to the organizers for the impetus for better change and the opportunity to leave the healthy nature of our region for future generations! "

3rd place - municipal institution "Nikopol secondary school of I-III degrees №22". According to the organizers, sewn 2021 bags symbolize the year of the new reference - without plastic bags. Students held a rally in the neighborhood of Metallurg, in which they donated bags to locals near the supermarket and talked about the importance of replacing plastic bags with reusable bags. Alina Vasilkova, a student of 8-A class, became the champion in making bags, she managed to sew 148 units. 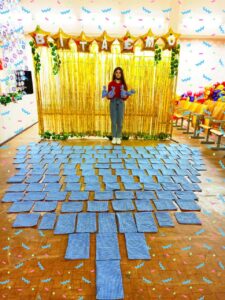 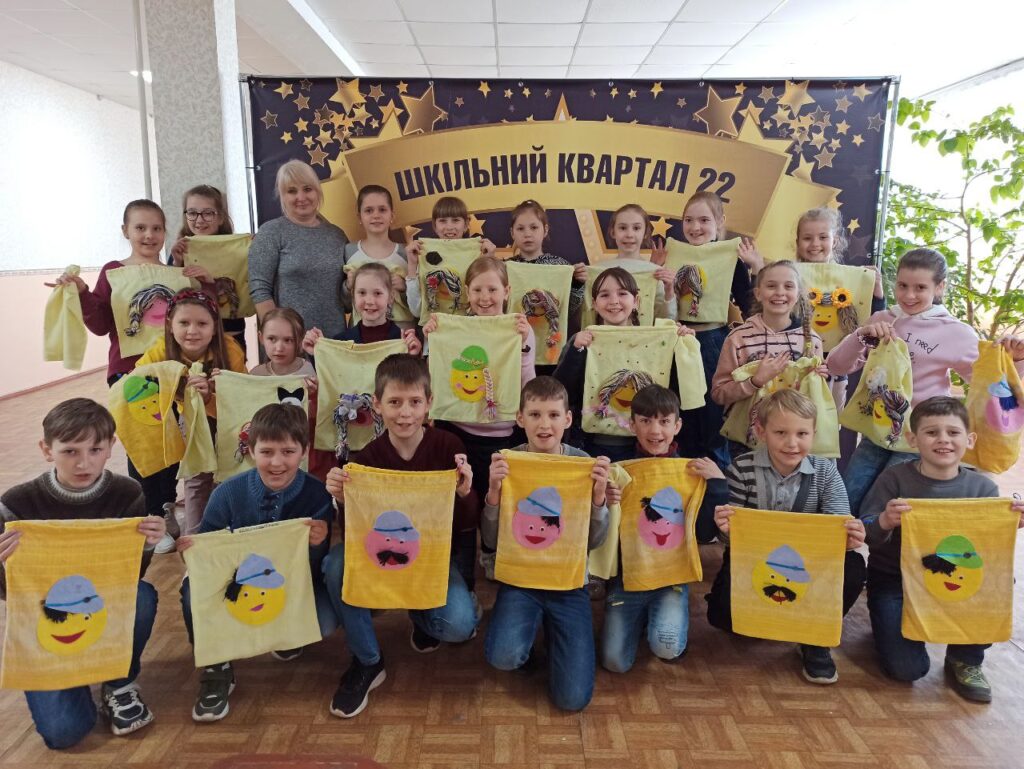 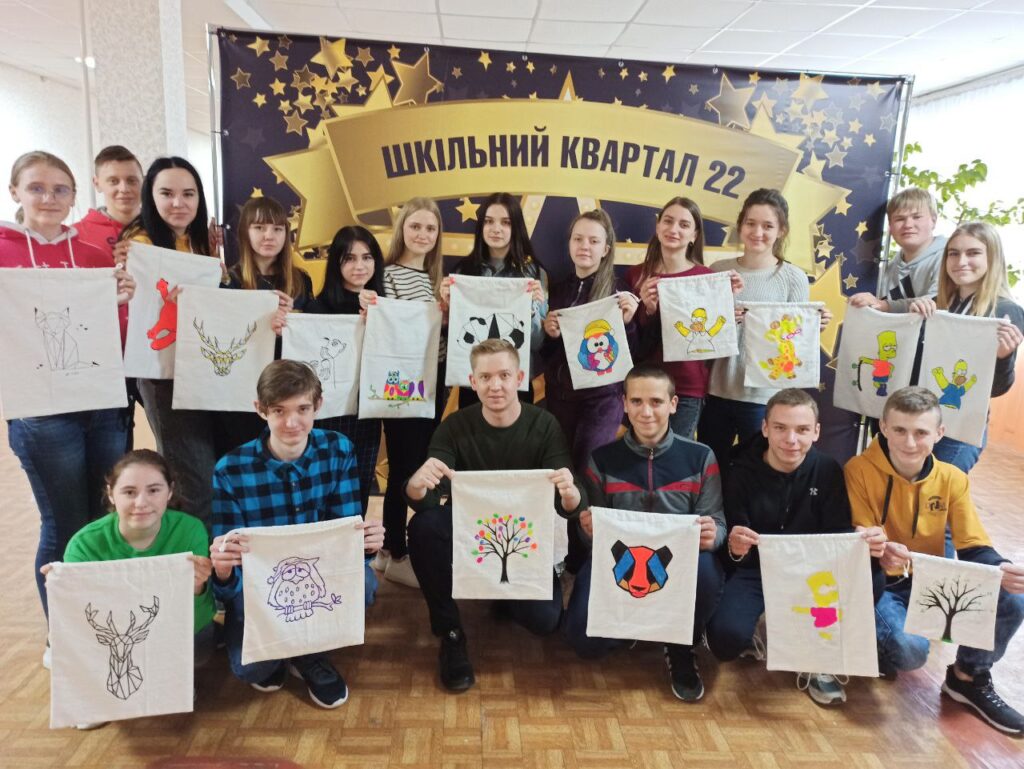 "From the very beginning of the competition, we were determined. Everyone sewed in groups: students, teachers, parents and relatives, sometimes four-legged friends helped. The school held actions, challenges, art workshops, exhibitions. The real highlight was the "Tree of Life" bag, the leaves of which are the fingerprints of the students of the class. WOW TEAM bags are made of agrofiber, a material that decomposes completely in three years. In the future, we plan to sell the bags at an auction, the funds from which will go to the treatment of a girl Amelia with CMA1 disease, " - comments the coordinator of the competition at the school Igor Chernovol.

Within the framework of the competition, the results of individual nominations were announced every week, which were selected by the jury on the criteria of creativity, practicality and quantity. Each work was unique - so choosing the best bags for the jury became quite a difficult task. 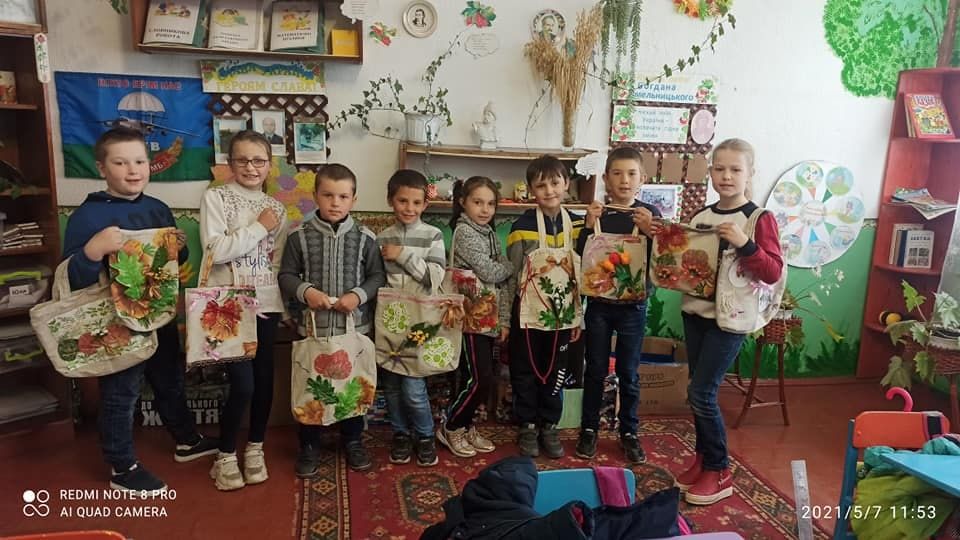 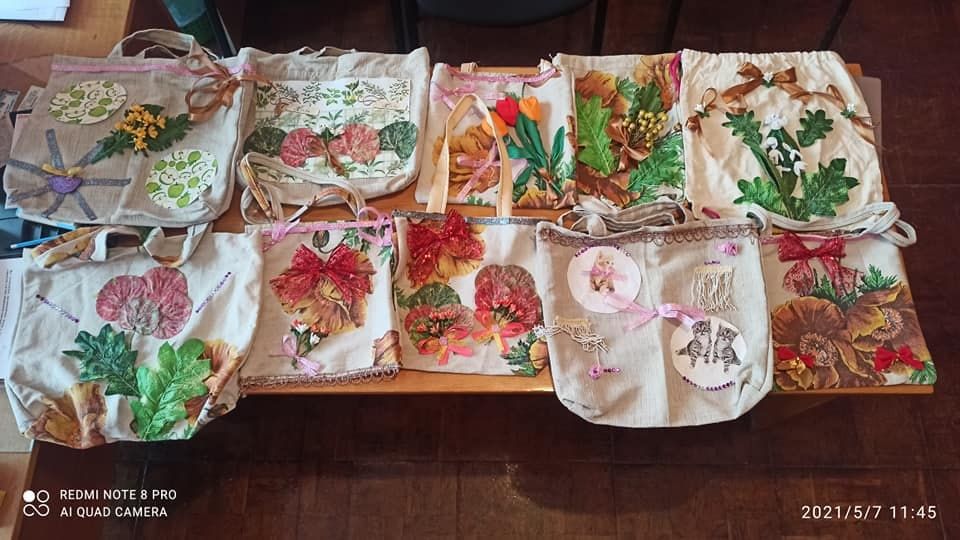 Anna-Maria Zhirnova, a pupil of the National Patriotic Education Center "Little Patriots" of the VDTSEV, sewed 100 yellow and blue bags, which together formed the shape of a flag.

Participants sewed bags of different quantities. Someone invested all the resources in one special product, someone deployed an entire workshop.

Some students approached the sewing of bags with humor. They depicted wild animals and pets on their bags, and Ivan Tsytsar created a bag with his cat. 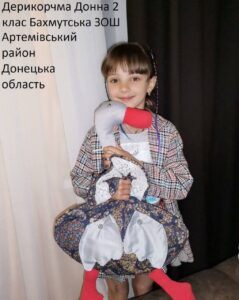 Animal bags were one of the most popular. Thanks to the bags, the students expressed their love for them by creating bags with applications.

Participants invented different variations of bags and innovations: bags for cereals, honey, bread, cookies, things. The winner of the individual nomination Eugene Koscinych created a bag-transformer, which turns from a big bag into a small accessory. 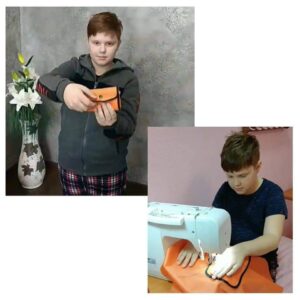 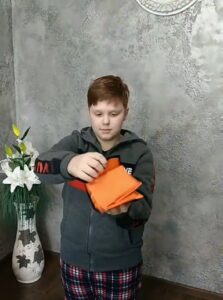 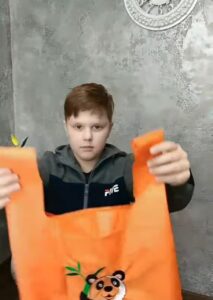 Sewing bags has become a good family pastime. Parents supported the children, worked in a team, picked up material together and sewed bags. And in the end they looked for applications for them: they bought cereals, seeds, put cookies and fruit. Bags were sewn mostly from used items, such as jeans, old dresses, T-shirts, sweaters or second-hand clothes. Participants emphasize the environmental friendliness, attractiveness and practicality of bags, because the products are stored in them longer than in plastic bags. 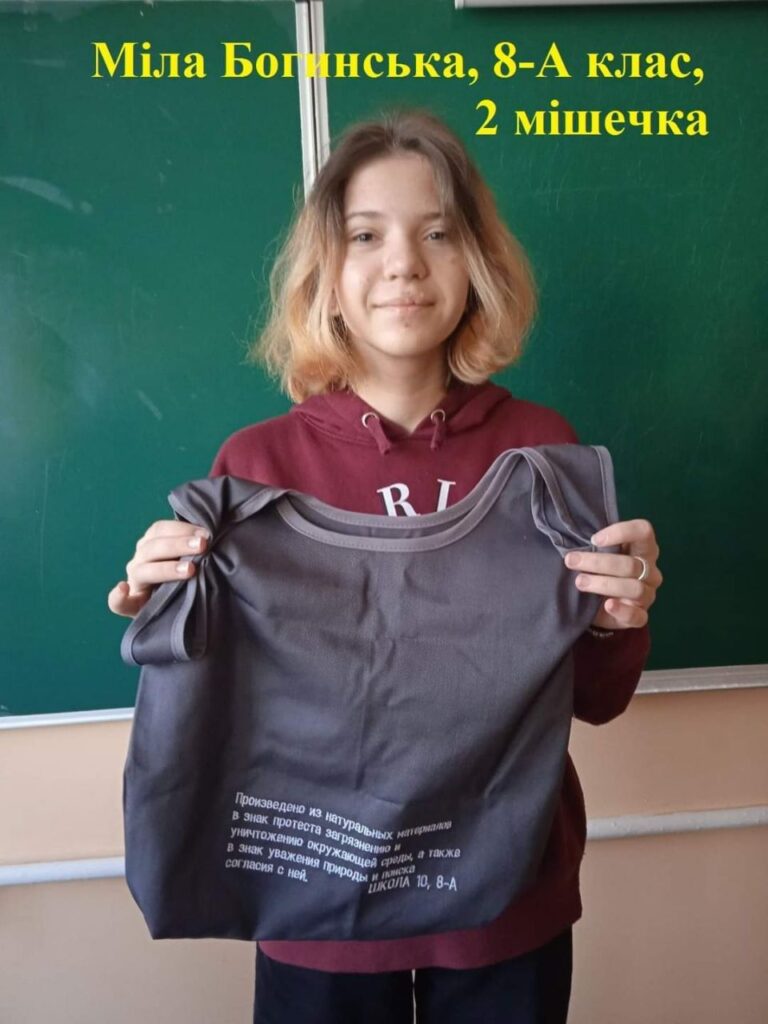 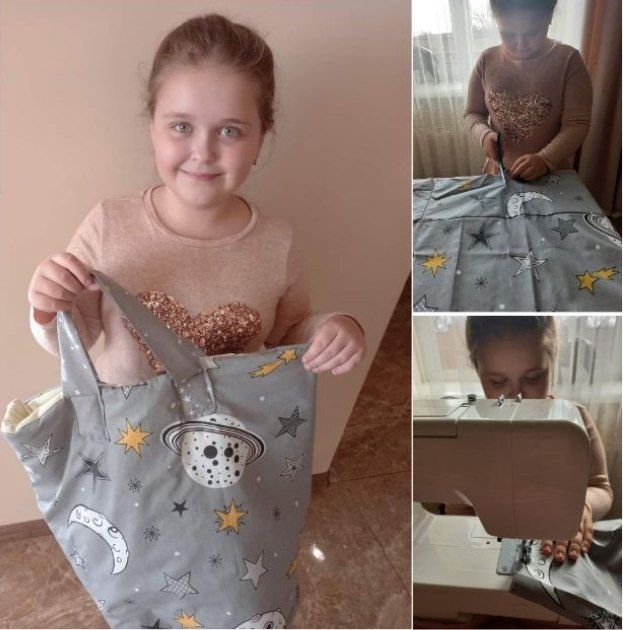 Some students decided to spread the idea of ecological consumption among ordinary passers-by and gave them their bags for home use.

Students from special schools also joined the project. The bags were sewn together with teachers in labor lessons and with parents. Pupils of Zhytomyr special school разом2 tested their new bags together with the teacher in the supermarket. Bought products on the list.

Participants developed whole campaigns, projects to motivate their environment to use bags in everyday life. The schools organized their own competitions, master classes, conducted educational classes, thematic lessons. In addition to photos, the children shared videos of the process of creating the bag and edited entire social videos. Marta Galabudnyk prepared a 3-minute video, where she described the scale of the problem of environmental pollution with plastic bags and finally made a decision - sewing bags. In her video, Victoria Batalova showed the process of making and decorating her own bag. You can watch the video at School Recycling World Facebook page.

You can find the works of other participants in social networks under the hashtags #bagSWW #schoolrecyclingworld #bag.

Although the competition has reached the finals, the project is still ongoing. The team of the International Youth Movement "School Recycling World" thanks everyone who joined the project and encourages to continue to sew bags and use them every day, together to create a new ecological future.

Many more initiatives are planned ahead. Subscribe to the organizers' pages and follow the news. See you soon!

Details on the site www.schoolrecycling.org